Thanks to IT staff, San Manuel Gateway College students benefit from personal laptops 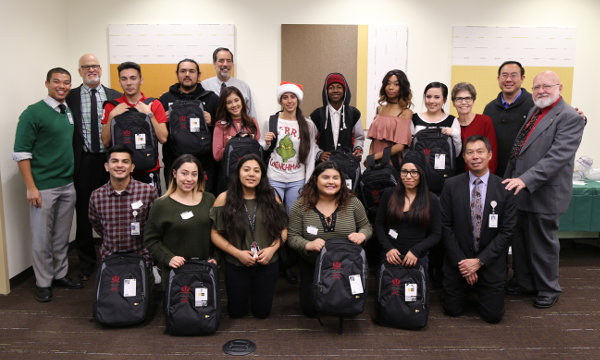 The college’s first students are graduates of local high schools, and many of them are the first in their families to pursue a career in health care.  According to Wild, these students, who began classes on Sept. 22, 2016, are now familiar with medical terminology and the intricacies of the human cell.

The IT staff was moved by Wild’s presentation.  “When they learned that many of the students were completing their assignments in local libraries and on their cell phones,” says DP Harris, vice president for information systems, “they were inspired to find a way to help.”

The IT staff along with a few other Loma Linda University Health, colleagues decided to personally donate the funds for each student to have a laptop computer, mouse, and backpack carrying case. The backpacks were embroidered courtesy of Digital Production Ink/LLU Printing Services.

After months of planning, on Dec. 20, the gift became a reality. During a Christmas luncheon the IT team presented embroidered backpacks to the San Manuel Gateway College students.

“This is heavy,” commented several students as they lifted the sturdy backpacks.

“The staff waited mischievously,” recalls Harris, “and watched as one by one the students realized there was something more inside. As the students lifted out the Hewlett Packard laptops, there were no loud cries, rather silent tears of joy—including the young men—as they realized the level of generosity that had been given.”

After the party the group moved to a classroom where desktop support staff guided the students as they set up their HP laptops and downloaded software.