Not all fun and games: Health Interactives launches at senior fair 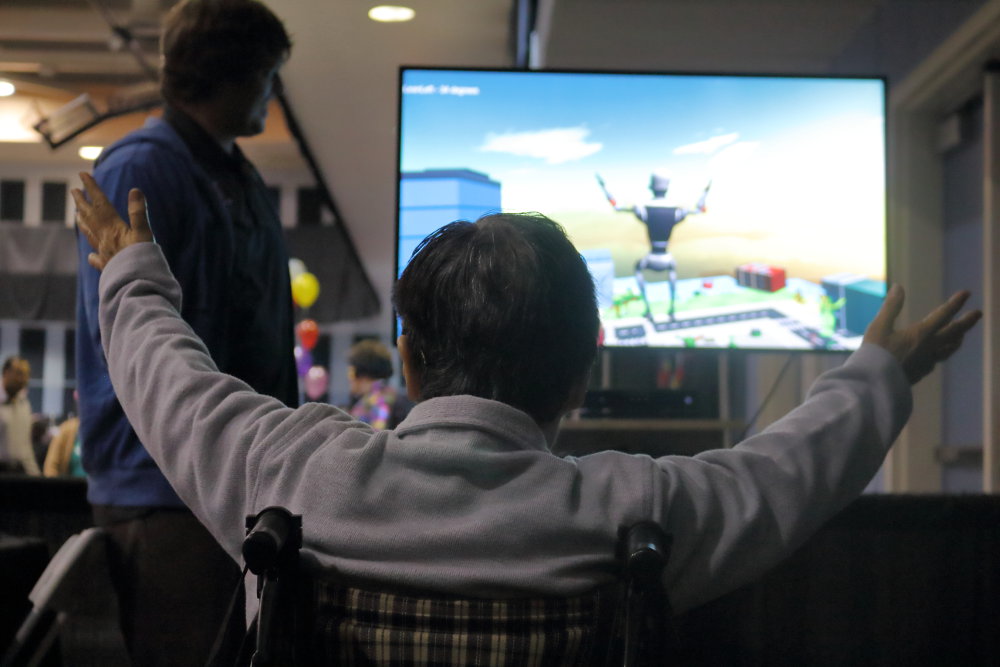 The woman in the wheelchair waggled her arms uncertainly, unsure of what she was supposed to be doing.

On the large screen in front of her, a giant robot stood among tall buildings, its arms mirroring the woman's hesitant movements.

Ryan Haglund, a developer with Health Interactives, attempted to convince her to move the robot's arms to knock over the on-screen buildings.

The woman's child companion came behind the woman's wheelchair to help, and the woman's movements became more confident and animated, her robot avatar swinging its arms at the buildings.

Haglund and the robot are both part of Health Interactives, an initiative that made its public debut at the annual Senior Health and Fitness Fair Thursday, Oct. 29, at the Loma Linda University Drayson Center.

Visitors delighted in challenging the robot's ability to copy their movements, turning and twisting, moving their arms and legs in complicated patterns to confuse it. Despite their efforts, the robot replicated their dances.

Among those who tested the motion simulator was Carol Strait. "It makes you exercise," she said. "Like if you dance [at home], you can see yourself on screen."

Despite all appearances, the demonstrations had practical value. The ball maze tested fine motor control and the robot measured balance and dexterity.

Although Health Interactives as an initiative is nearly a year old, to date the team has worked directly with select audiences. The booth at the senior fair was the first public demonstration of the team's offerings.

The team is made up of two developers--Haglund and Luis Luna--and an artist--Graham Kampmeier. The entire project is led by DP Harris, PhD, chief information officer for Loma Linda University.

"Health Interactives is trying to promote health lifestyles and activity via gaming and other interactive products," Kampmeier said.

Or, as Dr. Harris likes to say, "It's not all fun and games." Health Interactives is all about teaching.

Over the past year, the Health Interactives team has worked with Indian Springs High School in San Bernardino, creating a medical terminology review game; and with educators from the School of Medicine and the School of Allied Health to create a disaster triage training game.

Current projects include a collaboration with educators from Southern Adventist University on a science game and with a professor in the School of Dentistry on an X-ray game.

And there are applications for health care as well.

Lily Lee, MPH, is collaborating with the Health Interactives team on another project in development. Lee sees potential for occupation and physical therapy activities as patients can work on improving balance and range of motion.