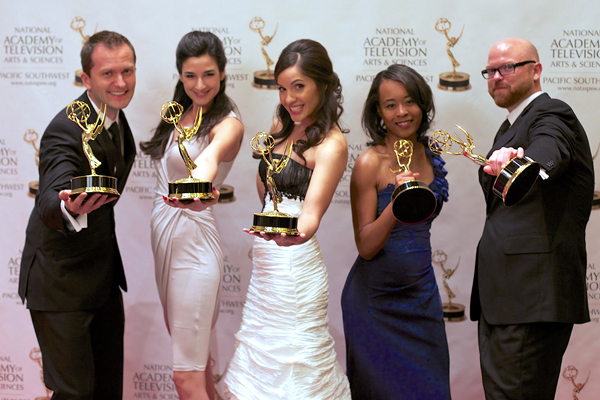 “Loma Linda 360: Beating Cancer” won an Emmy Award in the magazine program/special category. The first episode of season four, it gives viewers an inside look at the journey of cancer patients, cutting-edge proton therapy, and the celebration of survival at the annual Believe Walk event.

In the health/science program category, the Academy awarded “Loma Linda 360: Heart to Heart.” In this episode, the Escarcega family’s worst nightmare becomes a harrowing reality. Their newborn baby is slowly dying from congenital heart disease. Doctors tell them it’s the beginning of the end … unless a heart becomes available for transplant surgery. Will Baby David receive a heart in time? “Heart to Heart” follows Baby David’s journey and reflects on the pioneering efforts of infant heart transplantation with Baby Fae.

“End It Now: A Look Into Preventing Child Abuse” won in the public/current/community affairs category. This episode gives viewers an inside look at child abuse and the dramatic effect it has on people’s lives as they mature into adulthood.

In the human interest category, the Academy awarded the story “Who I Am.” Words can’t describe how traumatic life is after a disabling injury. This film features four PossAbilities members as they show how one’s identity isn’t about physical capabilities, but about who you are on the inside.

“Can You See My Pain” won the Emmy Award in the informational/instructional category. About one in five teens cuts or self-injures his or her body. This episode tells the story of three young adolescents who strive to live life without hurting themselves and raises awareness about this notorious coping mechanism.

Third year in a row

Season four of “Loma Linda 360” aired last year on the PBS affiliate KVCR and KVCR-DC as well as the CBS and ABC affiliates in the Palm Springs area. It is currently airing on Hope Channel and Loma Linda Broadcasting Network, and can be viewed online at llu.edu/360, www.youtube.com/user/LLUHealth, and vimeo.com/channels/lomalinda360.

Advancement Films is currently in production on a new TV show called “Life on the Line” that is being planned for release on PBS stations nationally.