New 'I Am' series debuts as collection adds more locations 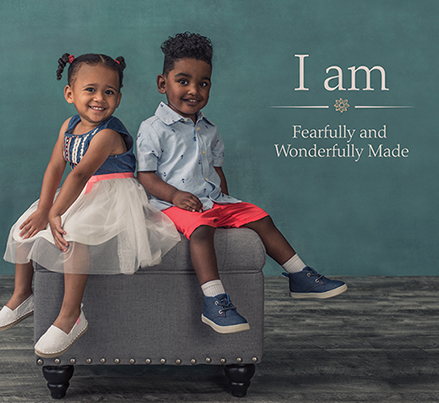 The “I Am” portrait series found in several campus locations features photos of patients and employees, each one with a descriptive word or phrase following “I Am” that speaks to an aspect of their story. The series is designed to provide hope and encouragement to patients, visitors, employees and students.

Loma Linda University Health debuted 65 new portraits in August during two receptions for the photo subjects and their families. The new series features 17 Children’s Hospital patients, 22 adult patients and 26 employees (16 of whom were also patients). As a thank-you gift, the subjects were each given a framed copy of their portrait and a USB drive with additional shots from their photo sessions.

The new “I Am” portraits are displayed in these locations:

• 27 are in the Medical Center first floor main hallway.

• Three are at Surgical Hospital.

• Seven are at East Campus.

Twins Matthew and Callia Castleberry, shown above, exemplify the type of moving story behind each of the new portraits.

At the second trimester of her pregnancy, Angelina and her husband, Matthew Sr., learned that Matthew had a condition called posterior urethral valves, which causes bladder and kidney damage.

Referred to Loma Linda University Children’s Hospital, the couple was given the bad news that baby Matthew was unlikely to survive the pregnancy, and in utero treatment to improve his odds could threaten Callia’s life, too.

Angelina felt an instant and obstinate faith in God that both her children would make it. She proclaimed that someday her twins would be featured in the “I Am” portraits on the hospital walls, in which she found hope and solace.

Children’s Hospital physicians were able to perform prenatal bladder procedures on Matthew that improved his chances. Callia helped, too, by sharing her amniotic fluid via small slits doctors cut in their sacs to connect them. Born at 31 weeks of gestation on July 1, 2014, via emergency C-section, Callia spent nine weeks in the neonatal ICU.

Matthew was there for five months, and he has been on dialysis his whole life. Until now.

He received a kidney transplant July 31 thanks to living donor Dep. Alicia Lopez, a former coworker of Mathew’s mother from the Palm Desert station of Riverside County Sheriff’s Department. Lopez secretly underwent about five months of compatibility testing to see if she was a match for Matthew. When the answer came back yes, she called Angelina, who collapsed to the floor at the good news.

Angelina returned the good news when she came to Lopez’s post-op recovery room and shared that the new kidney was already working beautifully in Matthew.

“Thank God,” responded Lopez. Her biggest fear was not giving up one of her kidneys but that Matthew would undergo the trauma of surgery and then have to face yet another one if the transplant failed to take. Now, Lopez wants to inspire others to consider organ donation. “Out of all of this, I just want people to know they can donate. It doesn’t take a superhero to donate.”

‘I Am Fearfully and Wonderfully Made’

Angelina Castleberry was tearful upon seeing her twins’ portrait hanging at Loma Linda University Health last month — but not surprised. She remembers predicting it on the day of her first appointment at LLU Children’s Hospital.

“The twins are going to make an impact on this world,” she says today. “I know it.”

The first “I Am” series portraits debuted in 2011 in the Medical Center, and the second in 2014. Most of those are still viewable at various points around campus. Additionally, the Children’s Hospital has its own “I Am” series featuring pediatric patients.