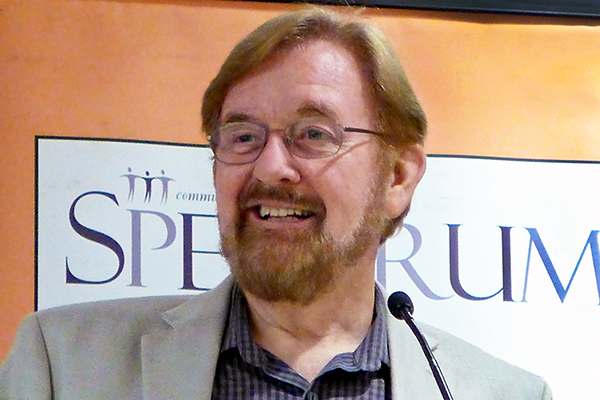 Roy Branson, PhD, esteemed faculty member of the Loma Linda University School of Religion, passed away from complications of cardiovascular disease July 7 at the age of 77. In this photo, Branson was discussing Spectrum Magazine, the journal he co-founded and edited for 22 years. He is remembered as a passionate and outspoken advocate for social justice.

Memorial services for Roy Branson, PhD, director of the Center for Christian Bioethics at Loma Linda University Health, will be held on Saturday, August 8, at 4:00 p.m. at Azure Hills Seventh-day Adventist Church in Grand Terrace.

The story of Branson’s meteoric — if somewhat unorthodox — career trajectory tends to overshadow an equally interesting personal narrative, but taken together, the two present a picture of a profoundly creative and innovative individual with wide-ranging interests and spheres of influence.

The day he died, the Adventist Review described Branson as “a fervent activist for various causes, from the civil rights movement to anti-smoking legislation, anti-poverty initiatives, and social, political and medical ethics.” The Review article also reported that he received his undergraduate degree from Atlantic Union College, earned graduate degrees at the University of Chicago and Andrews University, and received his PhD in religious ethics from Harvard University in 1968.

One of Branson’s many close friends, David R. Larson, PhD, professor of ethical studies at Loma Linda University School of Religion, enlarges that portrayal by citing a few notable titles and highlights of Branson’s remarkable career:

Branson was one of the first to integrate, and perhaps transform, Adventist theology by bringing a strong emphasis on social justice and religious ethics into the discussion, literally carrying his faith into the field when he felt the need to take a stand.

“He marched against racism with Martin Luther King Jr., Abraham Joshua Heschel and many others at Selma (Alabama) 50 years ago this spring,” Larson says, adding that Branson also protested the exclusion of women from the ministry by organizing the first ordination service for women elders at Sligo Seventh-day Adventist Church in Takoma Park, Maryland, in 1973, and for women pastors in 1995.

In discussing Branson’s contributions to Adventist theology, Larson lists Adventist studies, a theology of Sabbath and the second coming, apocalyptic literature and ethics, the secularization of medicine and the theology of joy as major areas of interest.

"Despite his many other contributions,” Larson concludes, “the countless number of people all around the world, in socially high places and low, who counted Roy as among their very closest friends will be his greatest legacy."

In 1967, former LLU librarian Alice Gregg introduced Branson to a third-year medical student and the two became fast friends. Today, Donna Carlson, MD, looks back on her friendship with Branson and articulates two contributions for which Branson often told her he would most like to be remembered.

“Branson never lost his gift for creative ideas,” Carlson continues. “Here at Loma Linda, he conceived and started the ‘Heroes of Health Care’ course and the ‘Ethics in Great Films’ series. He also worked to bring different schools together — most recently Public Health and Religion with a Sabbath school ‘Healing of the Nations’ series based on the book of Revelation — and he brought back the Provonsha lecture that now opens the Alumni Postgraduate Convention. His work in organizing and presenting fascinating Sabbath School classes at Loma Linda and Sligo is legendary.”

Born July 3, 1938, at Portland Sanitarium in Portland, Oregon, to missionary parents Ernest Lloyd (E.L.) and Ardice (Detamore) Branson, the future scholar grew up in Lebanon where his father established Middle East College. His grandfather, William Henry (W.H.) Branson, was president of the General Conference of Seventh-day Adventists from 1950 to 1954. Much of Branson’s childhood was spent in the Middle East in cities like Addis Ababa, Beirut and Cairo.

“When he was about 4, his mother was hired as a tutor for Emperor Haile Selassie’s two teenage daughters,” Carlson says. “She used to take Roy with her to the palace where the princesses would pick him up and kiss him; Roy didn’t like all that a bit.”

He did, however, like school. He skipped a grade, advanced at a rapid pace and finished high school at Greater New York Academy in New York City at 16.

“While living in New York, he had free run of the city,” Carlson reports. “He rode the subways to visit museums, parks and libraries; he got cheap, standing-room-only tickets to plays and concerts. His favorite haunt was the Metropolitan Museum of Art. He loved art, literature and music — particularly Mendelssohn — all his life.”

Carlson notes that Branson was deeply committed to the church that nourished him and was involved in helping spread the Adventist message from a young age.

“Roy was such a devoted member that he carried Adventist literature to give out to other passengers on the train,” she recalls. The fact that some of them may not have appreciated his zeal did not deter Branson in the least, as evidenced by an encounter with one of the greatest names in symphonic music.

“He was hanging around 57th Street, passing by the back entrance of Carnegie Hall one day when he heard the symphony,” she shares. “Finding an unlocked door, he entered a room where Arturo Toscanini was conducting a rehearsal. As soon as it was over, he went up and handed Toscanini a tract. I don’t know what Toscanini thought, but Roy felt he had fulfilled his Adventist duty.”

Branson’s natural leadership abilities revealed themselves at Atlantic Union College, where he was elected president of the student body. “He majored in English literature,” Carlson says, “and then went on to the University of Chicago where he got a master’s degree in the same subject. His thesis was on Geoffrey Chaucer’s poem ‘Parliament of Fowls,’ which was actually a romantic, political and social satire with philosophical undertones about the nature of free will.

“For Roy, Chaucer combined an interest in literature, politics and philosophy,” Carlson continues. “In fact, he always thought it was partly his work at the University of Chicago that got him into Harvard because his major professor wrote such a favorable letter supporting his application.”

In 1968, Branson successfully defended his dissertation, “Theories of Religious Pluralism and the American Founding Fathers,” and was awarded a PhD degree in religious ethics from Harvard. In the paper, Branson discussed the rift between two competing attitudes on the relationship between church and state at the beginnings of American democracy. His conclusion indicates the subtle schism between the views of Thomas Jefferson and James Madison, a difference that persists to this day. Evangelicals are fundamentally Jeffersonian, while mainstream Protestants tend to agree more with Madison.

While at Harvard, Branson became interested in the plight of other Adventists in graduate school and, with enthusiastic friends there, started the Association of Adventist Forums to help them stay in touch with other Adventist graduate students and the church.

During his years in Washington, Branson was invited at least twice to Rose Garden receptions at the White House where he met Bill and Hillary Clinton. He also testified before Congress on anti-tobacco legislation.

Aside from his passion for theology, the church, social justice, art, literature and music, Branson enjoyed one other notable long-term interest.

“It was baseball,” Carlson discloses. “He was an avid and enthusiastic Dodgers fan. It goes back to his days in New York. The family lived in Forest Hills, which is in Queens, and he became a lifelong fan of the Brooklyn Dodgers, complete with a fierce antagonism for the New York Yankees.”

As news of his passing spread, numerous Branson friends and associates weighed in on the importance of his contributions to Adventist education and life.

Long-term colleague Bonnie Dwyer, MA, who currently serves as editor of Spectrum Magazine and member of the board of directors for the Charles E. Weniger Society for Excellence, points out that the society recently selected Branson as one of three honorees for the Charles Elliott Weniger Award for Excellence in Adventism, which will be conferred posthumously in February 2016.

“The society has been honoring people who have made significant contributions to Adventism for the past 40 years,” recalls Dwyer. “Like Charles Weniger, the man for whom the awards are named, Roy was an enthusiastic Adventist who embraced life with an adventurous spirit. He mentored many ethicists and journalists over the years. Among other things, he will be remembered for his pioneering role in establishing an independent press in Adventism through the creation of Spectrum.”

Jon Paulien, PhD, dean of Loma Linda University School of Religion, recalls that after Branson became associate dean in early 2008, he took the lead in accreditation visits in 2008 and 2010 and program reviews in 2010 and 2014.

“Perhaps his greatest contribution as associate dean was his formulation of the five goals that religion teachers at Loma Linda seek in every class,” Paulien observes. “These five goals have encouraged the School of Religion faculty to elevate the use of Scripture and to keep the Adventist heritage up front whenever relevant. Branson also successfully pushed us to keep in mind the importance of moral advocacy to the task of religion within society.”

Paulien portrays another side of Branson’s personality when he discusses interpersonal relationships with the people of the department.

“Branson was most beloved among the faculty and staff of the School of Religion,” he explains, “for the way he circulated around the office, expressing caring concern for everyone and listening carefully to all joys, sorrows, and family narratives. He is deeply missed.”

“Roy was best known for his powerful role in shaping Adventist intellectual life and for his prophetic voice in calling Adventists to reclaim our heritage as people who care about addressing issues of social injustice and public health,” Thomsen notes.

“But I remember him,” he continues, “as somebody who made an extra effort to connect with the people around him. Long before I came to work for the School of Religion and he had any particular reason to be interested in me, I remember ways he engaged me in deep conversation and indicated an interest in my ministry and my ideas. As a work colleague, I could see the same forces at work. He was the guy who regularly stopped by people’s offices to ask a question, indicate interest and draw out the best in us.”

In addition to his many friends around the world, Branson is survived by his nephews, Brian and Bruce Branson, sons of his late brother, Bruce Branson, MD, who chaired the department of surgery at Loma Linda University School of Medicine for many years.

Branson was laid to rest July 20 in Montecito Memorial Park, where his father, mother, brother and grandfather are interred. He once told Carlson he wanted to wake up on the morning of the Resurrection and see the people he loved so much.